SOLID 6th FOR BAZ IN THE PENULTIMATE SBK RACE AT LOSAIL

On track at the Losail International Circuit, the stage for the final Superbike world championship round this weekend, the Gulf Althea BMW Racing team and rider Loris Baz have concluded the first of the two races in solid sixth place.

Superpole2: having concluded yesterday’s practices in sixth position, Baz went straight through to today’s second Superpole phase. After completing two laps with the race tyre, the Frenchman was lying fifth with a time of 1’57.401. Heading back to the pits to put in the qualifying solution, Loris had time for three more laps, the best of which he completed in 1’57.347. Thanks to this time, Baz earned a third-row start, in seventh place, for race one.

SBK Race 1: struggling off the line, Baz lost four positions and was lying eleventh at the end of the opening lap. Determined to fight back, the Frenchman was able to find and maintain a good rhythm, which saw him pass Savadori on lap eight and gain another position shortly afterwards. Ninth towards the mid-race point, Loris further picked up the pace in the final stages of the race, reaching both van der Mark and Davies and executing two impressive passes in quick succession to move up to final sixth place. The Gulf Althea BMW rider thus earns important championship points and brings home a positive result for the team.

“I’m very happy with how today has played out. Superpole went well, I didn’t do quite what I wanted with the qualifying tyre but my performance with the race tyre gave me confidence for the race. As ever, I didn’t make the best start.

It was a tough race, hot and humid, and I was struggling early on, but I think we made a good tyre choice, as I was able to come back strong. When I saw van der Mark and Davies were having some issues with the tyre,

I made a move and was able to score P6, one of our best results of the year. Let’s see if, in tomorrow’s final race, we can score the points we need to achieve a top ten championship finish.” 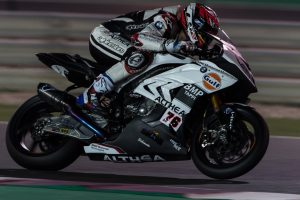