The opening race of the 2019 Superbike World Championship took place at the Phillip Island track in Australia this afternoon, and it proved to be a baptism by fire for the Althea MIE Racing team and rider Alessandro Delbianco, who crossed the line seventeenth in his first ever Superbike race.

Superpole: out on track for the 25-minute Superpole session, Delbianco and his technicians immediately put in the qualifying tyre. Having completed one lap (1’32.135), the Italian suffered an innocuous crash at turn 9 that saw him return briefly to the garage. Back on track for the final phase, the Italian completed another clean lap but was unable to improve on his previous time. He therefore closed the qualifying in eighteenth position, which translated into a sixth-row start for the 2019 season’s opening race.

SBK – Race 1: from the sixth row of the grid, the Althea MIE Racing rider maintained eighteenth place throughout the opening stages. Earning one position towards the mid-race point, the young Italian did not give up and, despite a drop in tyre performance in the later stages, he continued to push to the line. Delbianco thus closed his first ever Superbike race in seventeenth position.

The team will be back on track tomorrow for the Tissot Superpole ‘sprint’ race and the second 22-lap Superbike race, taking place respectively at 12pm and 3pm local time.

Today’s race was my first ever in Superbike, and the first time I put together so many consecutive laps. It was tough but I know we can do a lot better; what we’ve done today serves as a good starting point. I’ll try to use everything I’ve learned until now, both in Superpole and the race, during tomorrow’s races and the subsequent rounds of course. All we can do is continue to work step by step, and we will gradually improve I am sure. 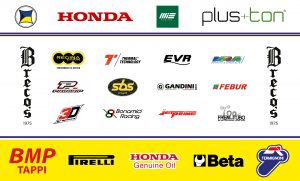